The sun peeked out a bit this morning, so I put Beebs and Twitch outside early on. Then--before I went to work--I spent a half-hour out in the yard and greenhouse, working with my flowers and herbs.
Posted by Laura P. at Saturday, June 17, 2006 No comments:

Now lest you think that means it is sunny and hot, let me remind you that August in our section of Alaska is the Storm Season, when old Pacific typhoons crawl up the coast of Siberia to die in the Gulf of Alaska.

It was the three Ws: windy, wet and warm. One thing about the low clouds and gusty winds--it will make it a quiet Friday evening at work. The "Let's fly to Seldovia for the weekend" crowd will decide to stay home, so we won't have the usual influx of Anchorage-area pilots over the weekend. So these rainy days provide a nice break in the summer traffic. And I don't have to water the flowers. 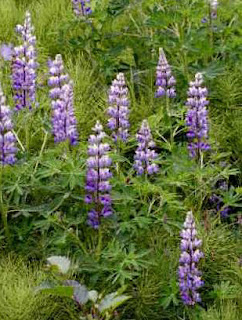 The lupine are beginning to bloom, marking the start of the Blue Month of summer. The sea-peas (wild sweetpeas) have blossomed out a week or so ago and now the lupine join them. Soon the wild geraniums will burst forth as well, and the margins of our roads and woodlands will be awash with blue and purple flowers. By mid-July, the first flowers of summer will have faded and we will move into the Pink Month as the wild lands become dominated by the ubiquitous and lovely fireweed--harbinger of Fall.

See--I *told* you there were bears in the woods...

As near as I can tell, this was about mile or so from where I saw the bear a couple weeks ago.

Not that we need to go out to the North Fork for bears. Denny and I were exploring a lot about a half-mile from our place the other day, crawling over downed trees and slogging through the muskeg, trying to locate survey markers. Since the lot had never been developed, it was a jumble of wind-fallen trees, like a huge game of pick-up-sticks. And it seemed every time we found a clear spot to stand, there was "bear sign"--quantities I had never seen in such a small area. Kind of nerve-wracking when you know you have no chance of running. Of course, we were making so much noise in our efforts, it would have been a very deaf bear who wouldn't have heard us coming.

Still, I was glad when we left the woods behind us and headed back home. Some adventures you just don't need.
Posted by Laura P. at Friday, June 02, 2006 No comments:

More About Our Fire...

From the Homer News :

A combination of strong winds and high temperatures caused a suspected winter slash burn on Green Timbers Road to flare up Saturday evening. Alaska Division of Forestry and Homer Volunteer Fire Department firefighters went about 7:45 p.m. to the fire just off the Sterling Highway on a bluff above Diamond Creek. When crews arrived, the fire had scorched a small building and came close to a propane tank. Firefighters knocked down the fire and saved the building.

"The Division of Forestry and the Homer Fire Department did a hell of a nice job on that to save the structure,” said Andy Alexandrou, a DOF fire information officer.

The fire was on property managed by Matt Shadle. It jumped Green Timbers Road and spread to three acres before being stopped. Firefighters from the Chena Hot Shots, based at Fort Wainwright, Fairbanks, also fought the fire. They were in Homer on Saturday to fight another slash pile that had flared up and burned .20 acres near Skyline Drive. Matthew James, the State Forestry incident commander on the Green Timbers fire, said he also called in two helicopters with water buckets.

“We had a lot of resources on that fire really fast,” he said. “That’s what helped us catch it.”
The fire burned a phone line junction box and cut service to 21 customers in the area, said ACS Communications spokesperson Meg Stapleton. Repair crews put in a temporary line Sunday morning and restored service by 4 p.m. Sunday, she said."

From the Homer Tribune:

Mary Bush was shouting angrily from her minivan Saturday evening as two Alaska Division of Forestry firefighters arrived on the scene of a windy wildfire that was growing ominously close to her small cabin.

“Come on, hurry up. Don’t just stand there, do something,” she yelled.At one point, Bush drove her van closer to the fire scene. However, as she got a closer look at the flames edging up to her rented residence, the more emotionally distraught she became. She threw the van into reverse and backed down the street, her view partially hidden by a few alders.

Occasionally, Bush screamed into her cell phone, literally helpless as the fire crept closer to the large propane tank adjacent to her cabin.“They’re not doing anything,” she yelled into the phone. “They’re just standing around and my house is going to burn down.”

More fire engines and firefighters began to arrive, but Bush didn’t emerge from her minivan until the helicopters began dumping water on the flames.

“I know it probably only took about 10 minutes for them to get here,” Bush said, sounding a little calmer. “But it felt like forever.”Bush, who rents a small cabin off Green Timbers Road, said that none of the numerous slash piles surrounding her residence were on fire when she pulled into her driveway just a few minutes earlier.

“I had just gotten home and was in my cabin when I heard this loudcrackling noise,” Bush said. “It sounded like a hard rain on the roof.So, I stepped outside and there were flames all around me. I went backin and grabbed my cat and I got out of there.”

According to Bush, she called 911 on her cell phone and discovered that her neighbors had already called it in.“It started in a matter of minutes,” she said. “I swear I had only beenhome for a few minutes, and nothing was burning when I got home.”

Apparently, the fire started as embers from an old slash-pile burnrekindled, according to a release from the Division of Forestry. Thecurrent trend of hot, dry weather combined with gusty winds continuesto create extreme fire danger in many areas on the Kenai Peninsula.Brush crews,

Homer Volunteer firefighters and two helicopters delugedthe area with water and fire-retardant, and had the fire under controlwithin the half-hour — and saved Bush’s home. “It’s charred right up to the foundation,” Bush explained. “But I think the things inside are still OK.”"
Posted by Laura P. at Thursday, June 01, 2006 No comments: