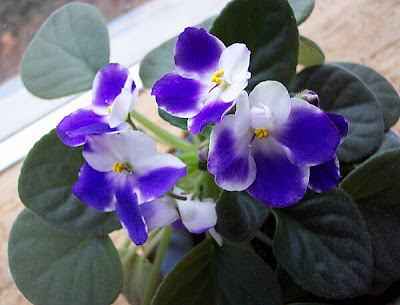 A spot of color in the increasingly drab late autumn, my African violet has decided to bloom.
Posted by Laura P. at Monday, October 29, 2007 No comments: 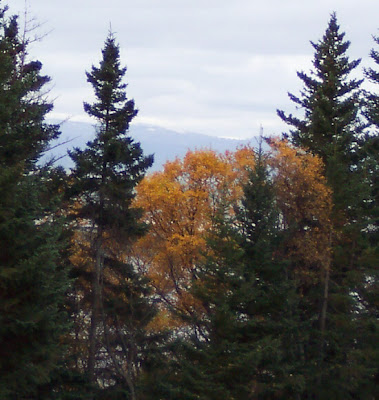 Another picture taken from the Flight Service Station looking to the southeast. One cottonwood (poplar) still retains its leaves, a spot of color against the winter-dark spruce.
Posted by Laura P. at Sunday, October 14, 2007 No comments:

The First Kiss of Winter 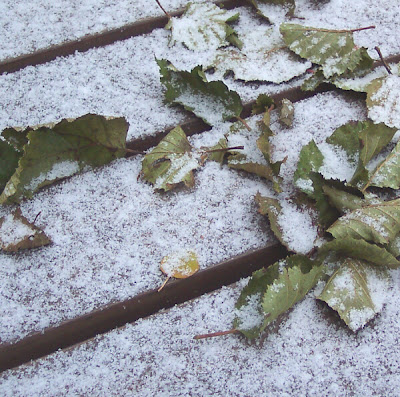 The leaves on the alders around our house have not changed color but since the sub-freezing temperatures of earlier this week, they have been falling in the slightest breeze. This morning's blustery winds have piled them up on the deck where the first actual snow of the season found them.

The falling snow makes a whispering sound against the dry leaves that still cling to the trees.
Posted by Laura P. at Friday, October 12, 2007 No comments: 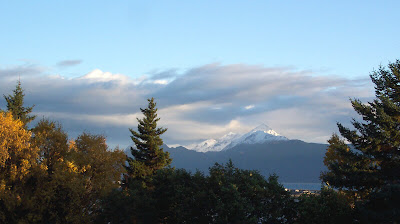 The classic view across Kachemak Bay toward the mountains, now wearing a more sharply-defined snow-line. 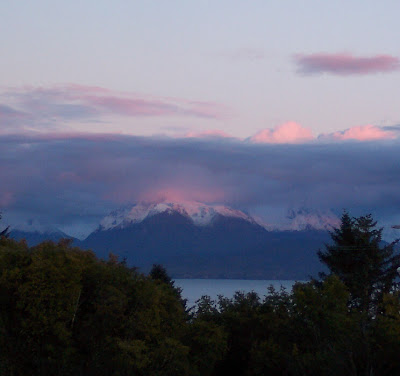 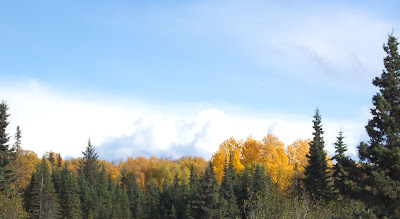 I stopped at Ninilchik on my way up to Kenai-Soldotna yesterday afternoon to take a few pictures. 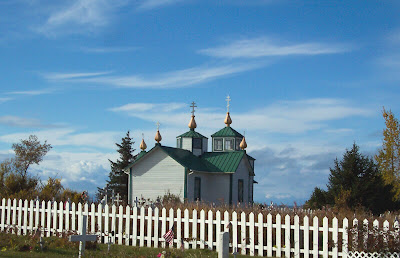 This is the old Russian Orthodox church at Ninilchik, overlooking Cook Inlet. 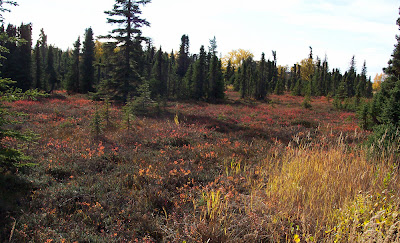 The autumn colors on the tundra.

Another early morning--up before dawn to go to work.

Of course, this time of year, getting up before dawn is less and less of a challenge every week.

I could hear the wind squeaking our television antenna but was pleasantly surprised by the warmth as I stepped outside--forty-five degrees under low overcast. Another surprise came when I noticed that the airport beacon was reflecting off the cloud layer, the steady green-and-white sweep of light evident even as I drove down Green Timbers Road, some seven miles and a hill or two from the airport.

Morning traffic has slowed considerably from its summer pace. There was just one car behind me, hugging my bumper into town--apparently in some kind of hell-bent hurry to get to the grocery store.

Our station faces the other way, its back toward the classic view of the bay and mountains to face the town of Homer and the thousand-foot bluff that rises behind it to the plateau of the Kenai Peninsula. Usually when I get to work on the early shift, the first flight of the day has already arrived and I can look across the runway to the terminal, where it is disgorging the passengers who rose early-early in Anchorage to catch the flight or the weary travelers who arrived on "red-eye" flights from the States overnight and have been waiting hours in the Anchorage terminal for their first chance to get to Homer.
Posted by Laura P. at Monday, October 01, 2007 No comments: