The Alaska Volcano Obsevatory has responded to the increased interest in the seismic activity around Mount Redoubt with webcams. One is close to the peak. 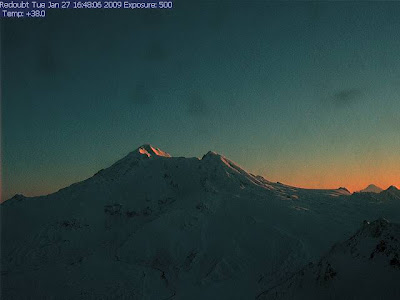 An oil platform on Cook Inlet gives a wider view. 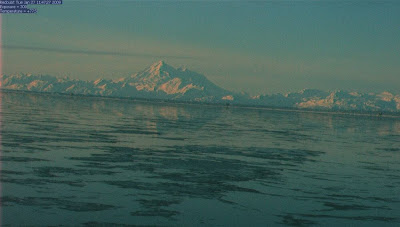 Those in a position to know are predicting an eruption of Mount Redoubt, a 10-thousand-foot volcano on the western side of Cook Inlet. I snapped this picture of the mountain yesterday from the top of the Bluff Point rise on the Sterling highway--about a mile or so from our home. Although I take more pictures of our other two near-by volcanoes--Augustine and Iliamna--I am fond of Redoubt, and this familiar view I get on my way home.

The last major eruption back in 1989-90 dusted our area with a nice layer of volcanic ash.

It is well worth it to click on the photo and enlarge it.

It was just a modest little shaker but it scared the cats and enthralled us for a couple of minutes.

From the West Coast and Alaska Tsunami WarningCenterAt 9:10 AM Alaskan Standard Time on January 24, an earthquake with preliminary magnitude 5.7 occurred 50 miles/80 Km west of Homer, Alaska.

Of course, the next thing I did was check on our local volcanos on the Alaska Volcano Observatory website. Aside from registering the earthquake itself, the seismic monitors on the near-by peaks showed normal background activity.

Except i noticed that Mt. Redoubt has been restless recently--which is good to know. We will be keeping an eye on that.
Posted by Laura at Sunday, January 25, 2009 No comments: 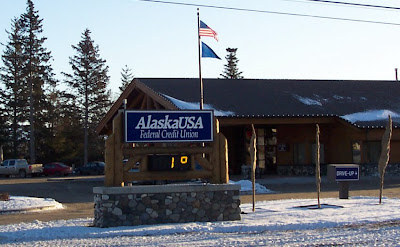 It has been clear and cold now for twelve days. Such cold snaps aren't uncommon. January and February are known to be our coldest months and under a dome of cold, clear air, there is little motion to our weather. With the jet stream passing well to our south, we could face another week or so of such weather.

It was twelve degrees below zero this morning at our house. Denny noted the temperature when he went outside at nine to plug in the Suburban. Those of you who live in northern latitudes know what that means. Those in balmier climes need to know that we outfit our vehicles with subsidiary heating elements that will warm the oil, the battery and/or the engine before we start (or attempt to start) the vehicle.

The town of Homer is situated mostly along the shoreline of Kachemak Bay at an average elevation of fifty feet or so. We live up on the bluff at about the eight- or nine-hundred foot level. Homer is warmed by its proximity to the open water, so town is warmer in the winter--and cooler in the summer--than we are at our location.

I have seens the temperature at the credit union colder than this only once or twice. And when it is this cold at mid-day, you know we are having a cold snap.
Posted by Laura at Wednesday, January 07, 2009 No comments: 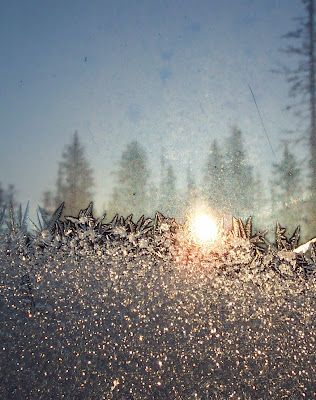 An even lazier day--if possible--than yesterday. I slept in until ten this morning. It felt good. I only got up because I had to add water to the vaporizer and care for the cats--feed and medicate them.

But once I got up and properly caffeinated, I got a few things done.

We got a trace of snow last night--fine crystals that glitter in the low-angled sun but don't add much to our snow pack. It had warmed up to near-zero this morning and probably got on the good side of zero in the heat of the brief afternoon but it isn't the break in the weather we are waiting for. That looks to be a couple days out yet.

To me, the season after Christmas, those several months sloping up to the Spring Equinox, is the sparse time of the year, a season of moderation, meditation, a clearing of cluttered spaces. I like this season and look forward to it. I have been decompressing since June but I am still learning how to be retired.
Posted by Laura at Monday, January 05, 2009 1 comment: 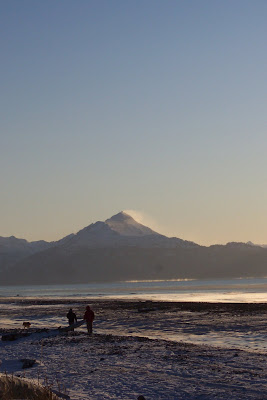 Sunshine on the beach. A walk on cruncy gravel. Makes you think of lazy summer days, huh?

It was so cold when I took this picture--about noon--that the sea was smoky. If you enlarge the photo, you will see the wind whipping snow off the four-thousand-foot peak across the bay and how well-bundled the couple on the beach are.

A day at the beach, Alaskan style.
Posted by Laura at Saturday, January 03, 2009 No comments: 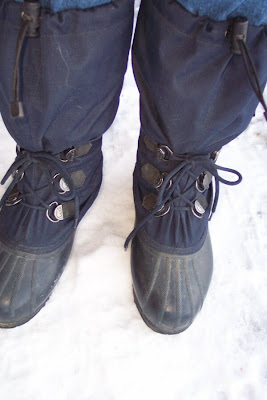 What the well-dressed Alaskan wears to town when it's five below. 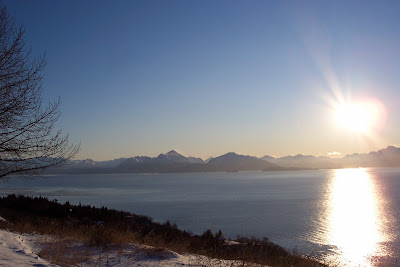 Wishing you a bright new year...
Posted by Laura at Thursday, January 01, 2009 No comments: